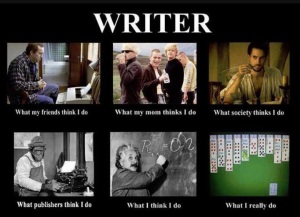 When I asked some people recently who they would be if they were stripped of all their roles – stay-at-home mom, salesman, flight attendant, doctor, etc – most responded in the same way.  “You mean, what would I do for money?”  “My kids are my life.”  “I’d just find another job.”  Or my favorite, “Celebrate my freedom.”  You go, girl!

In truth, wouldn’t it be nice if we could all celebrate our freedom from these self-imposed roles we play?  They’re so ingrained in us, that we really don’t know WHO we are without them.

While working in television production people would actually introduce themselves at parties with their name and job title.  “Hi.  I’m Joe Schmoe.  Key Grip.”  “Barbara Stills, Wardrobe Supervisor.”  “Christy Jacobs, Writer.”  Yes, I joined in on the fun.  I couldn’t possibly be just “Christy Jacobs.”  The silence that followed my name would just hang there, waiting for someone to just fill it in with whatever they wanted—“crazy girl,” “the one who can’t spell,” “soon to be married to a much older man.”  I couldn’t take the risk. The thing is, we didn’t even think about boasting our job title.  It’s just what everyone did.  It’s as if we were all trying to prove our worth based on the job we did.  What if we all went further and confessed our personalities and habits?  Then things would really get interesting.  “Hi.  I’m Bob Jones.  Gaffer.  I work out three times a day and I’m screwing your wife.”  Simple.  Get it all out there right away!  No secrets.  Now, we’ll not only label Bob as a Gaffer – but we’ll also identify him as a “home-wrecking creep.”  Can men be home-wreckers?  Of course they can!  This is 2011!

But back to my original question: Who are we without our roles?

Some highly evolved enlightened folks might say – “I’m a spiritual being having a human experience.”  But try that one out at a non-USM cocktail party and watch the room clear.  “What?  Did I say something?  Do I smell?”  People just don’t “get” that.  But, on the other hand – they don’t seem to have another answer either.

When I left my TV writing job and got a divorce, I found myself without an “identity” or role to play.  Sure, I was still part of a family and played my role of Daughter, Sister, Aunt.  But my professional “role” was gone.  At first I was lost and went into withdrawals.  I didn’t know what to do with all the time I suddenly had on my hands.  What I discovered is that with all my doing, doing, and more doing (I was your classic 60+ hour-a-week workaholic) – I had no idea who I really was.  And now suddenly, the Universe had forced me into finding out. Forced me out of the “real world” of role playing and into solitude confinement.  I had no identity, nothing to “do,” no one to hang out with… except ME.

Now, yes, I know.  I AM pretty spectacular.  Who wouldn’t want to spend time with me?  Well, I didn’t.  I hated myself—well, hate is a strong word.  But I certainly didn’t love myself.  And, boy did I find that out fast, because when left alone with just ME, I panicked.

Now, years later—I have the benefits of knowing that this was a true battle between my Ego and my Authentic Self.  Well, my Authentic Self wasn’t actuallyin the “fight.”  It was just starting to shine through.  “Notice me,” it whispered in my ear ever so gently. “I’m here…”  My Ego was clearly worried that if I got quiet enough, I might actually start listening to its nemesis, The Authentic Self, and it’d be “bye-bye” for it.  For my Ego – this meant WAR.  It refused to lose control.  So it started feeding me thoughts like, “Without a job, you’re nothing. And you’ll never get another job because you’re not good enough.  No one will ever love you.  Why would they?  You don’t have a job…” and on and on and on.  So I bought it… for a while.

And then, something happened.  After about a year, I started to “listen” to my wise, loving, all knowing Authentic Self.  Yes, it took a year.  I had to decompress!  The Universe wasn’t going to give up on me.  It forced me to shut out all the noise that came along with the role playing, and all that damn “doing” — and in the silence, a miracle occurred: I found ME.   “Nice to meet you, ME. Maybe we can hang out and have a couple beers.”

And after spending more and more time with ME—I actually started to like ME. I even began to LOVE ME!  I would even hang out with ME voluntarily!  I know, it’s CRAZY!

But my point to all this babbling is this: When I was stripped of all the roles that I played in life and felt that I was left with nothing, what I found was even better than I could’ve imagined.  I found my true SELF.  I shut out all the noise, found peace, and got to know ME.  ME stripped of the titles, roles, game playing, identities — and sometimes ME stripped of – well, clothes.  What the heck, I live alone!  Don’t judge ME.  I don’t.  🙂

So my challenge for you as you go through your day, is to first notice how many roles you play.  Also, just for fun, pay attention to how you change with each role.  Are you friendlier with a stranger in the grocery store than you are to your spouse?  If so, why is that?  As you perform each role, is it possible for you to be your Authentic Self for the entire day – without shifting into different Ego driven personalities?

Since I realize that no one can strip themselves entirely of the roles they play in life, I wonder – if we are at least conscious of how we act in our different roles, will we begin to notice the differences and start to live more authentically – from our HEARTS?  From our Authentic Selves.

And after you’ve spent the day noticing your different roles – do your SELF a favor.  Get quiet, shut out all the noise and just BE.  Try it.  You just might like getting to know YOU.  Introduce your SELF.  Get acquainted.  Have a beer.  It’s on ME, Christy Jacobs– sans title, role, identity…  Cheers!

P.S. For the record: YOU ARE LOVE!

With Love, For the highest good…

3 thoughts on “Stripped of our Roles — Who are We?”